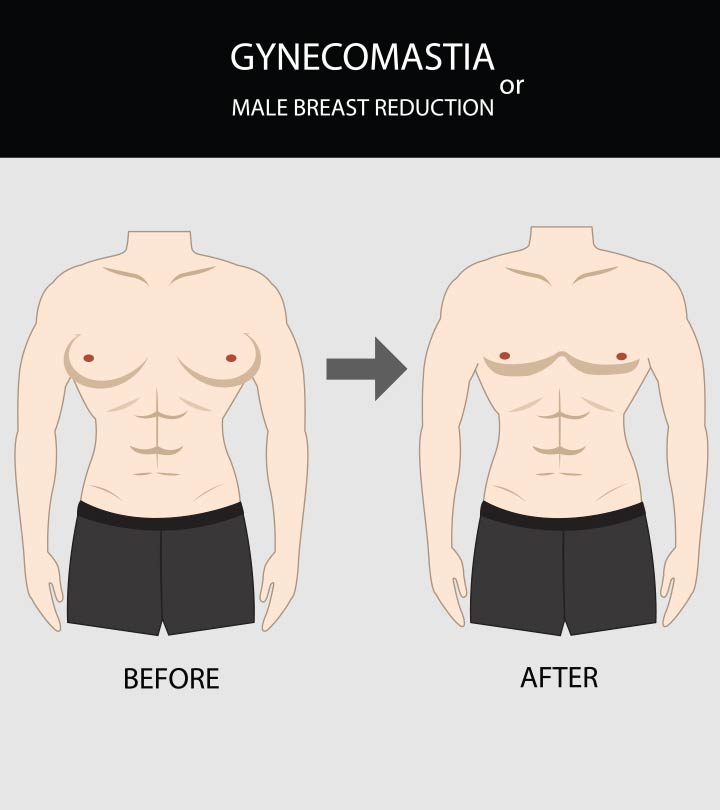 Gynecomastia is a condition in which a man has excess breast tissue growth. Although the glandular breast tissue is present in all men, in some, they grow above the average level, making them more prominent (1).

This condition is common among teenagers. Breast development is mostly due to hormonal changes. As a result, the condition usually goes away on its own. But, sometimes, gynecomastia could be due to other causes and may be a symptom of an underlying medical condition, such as hormonal imbalance. Hence, a diagnosis from a medical professional is the best way to determine the causative factor.

Learn more about gynecomastia in teens, its diagnosis, and treatment in this post.

How Common Is Gynecomastia In Teens?

How Long Does Gynecomastia In Teens Last?

Gynecomastia may last for a few months or a few years during puberty. It begins during early puberty and may fade away during middle adolescence. Usually, the breasts reduce within six months to two years (4).

What Causes Gynecomastia In Teens?

Fluctuating hormone levels (estrogen and testosterone) during adolescence is the main cause of gynecomastia in teens. During these fluctuations, elevated estrogen levels could cause enlarged breasts (2).

In rare cases, gynecomastia could occur due to the following reasons (1) (5).

Some obese teenagers may develop gynecomastia due to the accumulation of fat tissue instead of glandular tissue in the breasts. This is called pseudogynecomastia (false gynecomastia), which is independent of puberty and related hormonal changes.

What Are The Symptoms Of Gynecomastia In Teens?

Gynecomastia in teens can be identified due to the enlargement of either one or both breasts. It may begin as a slight lump beneath the nipple. Breast tenderness may also be present (5).

The following symptoms may be present if the breast enlargement is due to non-hormonal reasons (3).

How Is Gynecomastia In Teens Diagnosed?

A physical examination is a primary method of diagnosis. The pediatrician may check the teen’s medical history and suggest any of the following tests to confirm gynecomastia (5) (6).

What Is The Treatment For Gynecomastia In Teens?

Gynecomastia in teens usually goes away in a few months to a couple of years. If the enlargement is due to puberty, no treatment may be recommended. However, if extreme hormonal imbalance is identified, an endocrinologist may suggest hormonal therapy (5).

If gynecomastia is due to other reasons, the treatment could depend on the cause and may include (7):

What Are The Complications Of Gynecomastia In Teens?

Benign gynecomastia due to hormonal changes doesn’t cause any complications. However, teens with gynecomastia may face emotional challenges. Increased self-consciousness regarding their appearance might make a teenager skip school and social events. It may even affect their mental health. In addition, adolescents with gynecomastia may frequently opt for loose clothing to hide their physique. These constant thoughts on embarrassment may lead to anxiety and depression (2).

Complications may arise after undergoing surgical treatment for gynecomastia. These risks may include (8):

Although gynecomastia in teens is a common condition, it usually goes away as the teen grows older. You may consult a doctor for a timely diagnosis and rule out serious underlying causes. If the condition affects the teen’s daily life or takes a toll on their mental health, speaking to a therapist may be helpful.

MomJunction’s articles are written after analyzing the research works of expert authors and institutions. Our references consist of resources established by authorities in their respective fields. You can learn more about the authenticity of the information we present in our editorial policy.

Sindusha is a clinical nutritionist with over two years of experience in diverse fields of nutrition. She did her Masters in Food Science and Nutrition and has qualified UGC-NET. She interned as a quality control analyst and as a dietitian during her graduation. She was a part of several community nutrition projects and a phytochemical-based nutrition study during the same… more
This article was originally published by Momjunction.com. Read the original article here.
Share on Facebook
Share on Twitter
Share on Pinterest
Share on LinkedIn